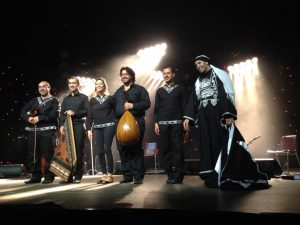 Syrian band Broukar was formed in 2007 in Damascus, a city that has long been one of the Arab World’s centers for cultural and artistic innovation, especially in the field of classical Arab music. The excellent musicians and artists composing the group are all part of several Arabic orchestras; they have all studied and trained in prestigious schools as the higher Institute of Music in Damascus, and some teach Arab music. The name Broukar comes from an ancient hand-made precious fabric from Damascus. 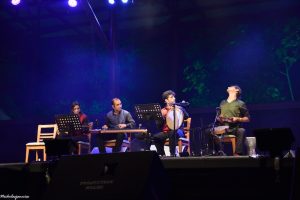 Broukar original group of three musicians, those who founded Broukar, has expanded: there are now five of them on stage: four musicians and a whirling Dervish dancer. The highlight of their eagerly-anticipated performance at the Rainforest World Music Festival 2016 was certainly the hypnotic ritual of the sacred dance of the Dervish, as dancer Ahmad Alkhatib, dressed at first in the traditional white Sufi costume and later in a magnificent black-and-white dress, turned on his own axis slowly at first then faster and faster, in an unrelenting spinning to ecstasy. This dance is based primarily on the rotation and hand movements in reference to the name of God. 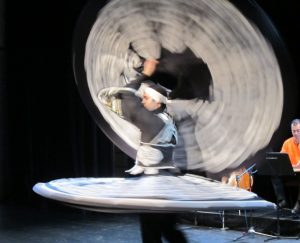 The dervish ceremony represents a mystical journey of man’s spiritual ascent through mind and love to perfection. Finding the truth and deserting his ego, the Dervish returns then to the spiritual journey as a man who reached maturity and he can love and be of service to the whole of creation without discrimination of believes, races, classes and nations. Revolving around the heart, from right to left, is the dervish way of conveying God’s spiritual gift to the people upon whom he looks with the eyes of God. 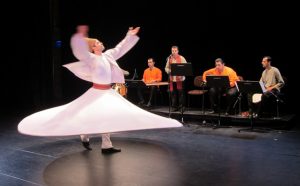 Broukar enthusiastic and piercing music is a highly spiritual reinterpretation of classical Arab music (both singing and instrumental), a typical and authentic oriental music in all its colours and sources, a kind of revival of the musical heritage of the East. Lyrics cover secular and religious topics and Broukar repertoire is inspired by the divine Sufi philosophy. Sufi singing comes from Sufism, a practice of Islam, and is directly associated with the Dervish dance. 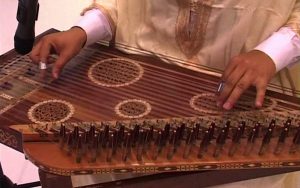 One of their traditional instrument is the kanun (or qanun), a flat trapezoidal wooden box with 78 strings. Broukar musicians teach kanun music to Syrian young generations so they can hold on to and keep alive the culture of their country, with the hope to form some of the future Syrian composers and musicians.
Broukar was featured in Village du Monde, a 2012 compilation of artists from Swiss festival Paleo. Should you wish to book one of their performances, Broukar are represented by Artways: www.artways.com
Dervish dancer Ahmad Alkhatib fb: https://www.facebook.com/ahmadervish