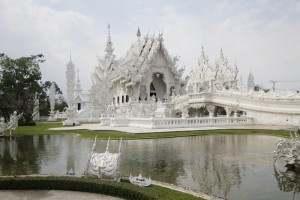 You cannot say that you have seen Chiang Rai without having been to Wat Rong Khun. Commonly known as the White Temple, this is a Buddhist and Hindu temple with a huge structure designed by famed Thai painter and visual artist Chalermchai Kositpipat. Wat Rong Khun is today one of Chiang Rai’s biggest tourist draws, and I had a chance to visit it as part of a Chiang Rai bicycle tour (CLICK HERE TO READ ABOUT THE TOUR). Every day, hundreds of visitors line up to see the main building of this religious complex built just 13 km south of the city center of Chiang Rai. 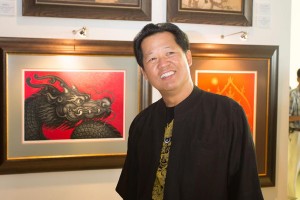 Wat Rong Khun unconventional architectural work is inspired by the Expiatori Temple from the Sagrada Familia in Barcelona, Spain. The temple is currently under construction, and it can actually be considered a work-in-progress. Its construction began in 1997, and the completion is not expected to happen for another 50-60 years. The project is being funded by donations and by sales of Chalermchai Kositpipat’s gallery prints, as well as by the private funds of Kositpipat, who had a very poor upbringing in his home town of Chiang Rai, but who has now reached a certain level of wealth and has decided to give back to his community. He is rumoured to have already invested 40 millions thb (1 million Euros) of his own money into the project. 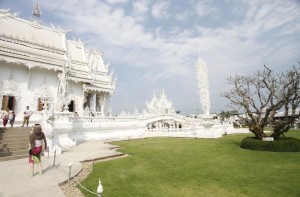 Chalermchai Kositpipat is famous for Buddhist symbolism and for the traditional Hindu modern twist in his art; his works are also known outside of Thailand. Despite being one of the most famous contemporary Thai artists, Ajarn (a title reserved to professors and great masters) Chalermchai Kositpipat has long been criticised for his stylistic choices: the outdoor complex of the white temple is completely made up of white lime and millions of small mirrors embedded in the tiles that make a beautiful light effects. The choice of white, like many others, is dictated by the idea of communicating through important evocative symbols. Asked why he has chosen to make Wat Rong Khun white, Kositpipat replies that gold is “suitable to people who lust for evil deeds” so he wanted this one to be more pure, different from the traditional golden temples. However amazing the white effect is, and no matter how much sense his concept makes, Wat Rong Khun is not always well digested by the local population, accustomed to hundreds of years of bright colours. 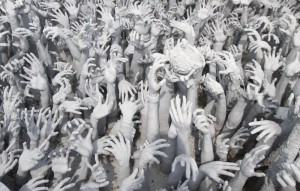 Back to my visit, past a pond populated by white carps, I made it across a bridge that crosses a sea of ghoulish white supplicant hands pointing upwards and reaching from the pits of hell while sinking to the underworld; this bridge dictates the cycle of rebirth and separates a small semicircle that represents the world as we know it, and the temple. It symbolises the road to happiness above the temptation, greed and desire. Two huge white naga snakes accompany the faithful to the inside of the temple; disembodied heads dangle from trees. This symbolism seems to be warning us: leave your anger and greed at the entrance or you will end up in hell. 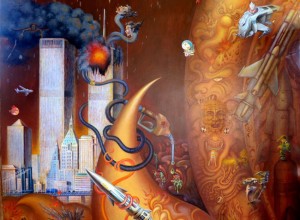 Inside I was greeted by seraphic Buddha statues sitting in meditation on big lotus flowers, and I paid my respect to them before concentrating on the unusual iconography of the interior walls: not the usual story of the Buddha as depicted in most ordinary temples, but a series of frescos on shades of orange with characters that include Superman, Spiderman, Michael Jackson, an International Space Station, Batman, Angry Birds, Osama Bin Laden, George Bush and even Neo, the chosen one in the Matrix trilogy. These mixing of apocalyptic visions and science fiction is a choice that surely searches for a blend between the West and the East, the ancient and the modern. Unfortunately, photo taking is not permitted inside the the main building of the White Temple, so you have to take my word for it (or visit the temple yourself). 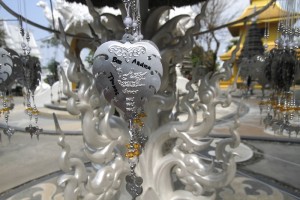 While I was very puzzled by the interior, where I spent longer time than I had planned, I was really amazed by the crisp white aesthetic of the exterior. Actually, the whole compound revealed endless surprises. The guide took me around each part of the grounds, explaining the symbolism of the artwork and of the sculptures. Around us were statues that seemed carved out of ice, with beautiful topless girls designed following the traditional Hindu canons, surrounded by pretty installations that are proudly displayed in the huge and very well-kept gardens. For a small donation, I wrote our names on a silver leaf and hanged it on the prayer trees present in the garden, joining the over 100,000 leaves already present. 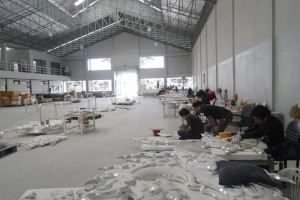 The guide then took me to the massive workshop warehouse where I could witness work behind the scenes: sculptures, panels, mirrors being cut and glued to cement wings; several young artists take part of this amazing project, one that will take decades to properly complete. On the outside, a golden pagoda that looks like a temple in itself hosts the toilets.

temple in the making

Wat Rong Khun was badly damaged during the 2014 earthquake and it was closed for a short time until some experts verified the damage and reported that none of the complex structures suffered from extensive damage. At the Chalermchai Kositpipat gallery and shop, you have the chance to purchase one of the several prints or a book on the artist; in this way you will help financing works at this amazing structure that is Wat Rong Khun. Entrance to the White Temple is free, but I heard rumours that they are planning to charge a small fee very soon in order to collect funds for the construction.

Chalermchai Kositpipat believes that this temple, his great tribute to Buddha, will give him immortality. Once, talking about Wat Rong Khun, he stated that “only death can stop my dream, but it will not stop my project!”

I have visited several temples around Asia, and I can easily attest that this is indeed a unique one. Visit it if you have the chance.

Asian Itinerary was kindly sponsored by Laluna Hotel and Resort, read our review on https://asianitinerary.com/laluna-hotel-and-resort/ or BOOK A ROOM BY CLICKING HERE !