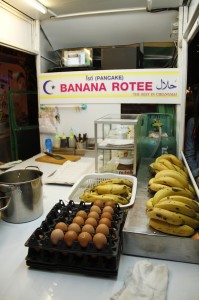 If you have been to Thailand, you will be familiar with the roti bread pancake stalls, as you will find them simply everywhere, especially on the islands and in the beach resorts. I for one am quite familiar with them. The Thai pancakes called roti, and served in an array of versions by the roti carts all over the country, are round flat breads made of a dough that is slapped on a metal counter and fried in margarine or clarified butter until it becomes a sort of a crepe. Roti looks straight forward to make, though it may take some practice to get it right.

Rotis are usually cooked by Muslims; some can make them really nice, dry and tasty, the secret seems to be either using little margarine, or rubbing off the oil when the roti is cooked. The metal counter used to cook roti is a heavy piece of sheet steel 2cm thick, and it has a slight depression in the middle to hold the melted butter that the roti is fried in. There are different versions, and you can find one in steel shops in Bangkok’s China town. 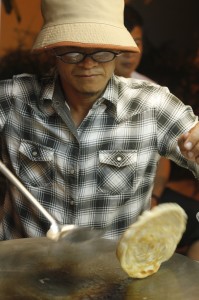 Mmmm, only talking about rotis makes me crave them. I usually return to a good roti stall and try to stick to it, rather than trying different ones. Some vendors make them rather spongecake, others very oily and greasy, the traditional way. I love the banana version and often rave about it. The vendor cuts the banana in slices, lay them over the half cooked dough and folds it over to make a square. Once the roti is properly cooked, they remove it from the pan, cut it in 9 squares and drizzle sweetened condensed milk over its top.

Other versions include coconut, Nutella, egg, cheese, raisins, chicken curry, you name it, and may come topped with chocolate syrup and other sauces available on the cart. It is, finally, eaten with a wooden skewer. Delicious! next time you are in Thailand make sure you eat plenty. If you ever need a recipe, you should be able to find one on the Internet. Roti vendors sell pancakes in many Asian countries, not only in Thailand, so alternatively get to your local roti vendor and ask him!