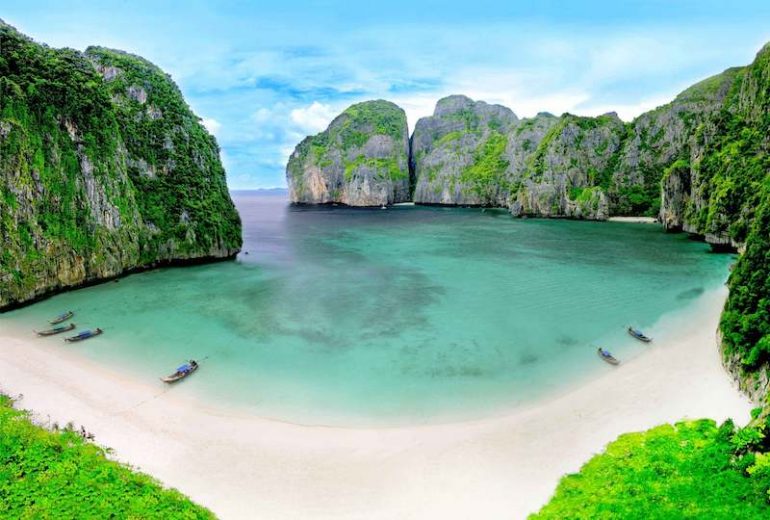 The Thai government is considering a temporary closure of Maya Bay, a popular tourist destination in the Krabi Province, south of Thailand, following the recent discovery of coral bleaching.

The planned closure – the first for Maya Bay – is expected to last three to four months in the second half of the year, according to Sarayuth Tanthien, head of Nopparat Thara – Phi Phi Island National Park.

The pristine beach of Maya Bay – part of the popular tourist destination of Phi Phi island in the southern city of Krabi – was the main filming location of The Beach, a Hollywood blockbuster released in 2000.

A number of academics have campaigned for a temporary closure of Phi Phi island over the years, citing an urgent need to allow the natural environment to recover.

More than one million people visited Phi Phi island last year, with as many as 5000 visitors each day during the high season, according to the national park.

Maya Bay is a stunningly beautiful bay that is sheltered by 100-metre high cliffs on three sides. Inside the bay there are several beaches, most are small and some only exist at low tide. The main one is around 200 metres long with silky soft white sand, underwater colourful coral and exotic fish in exceptionally clear water; the whole bay is one big reef.

Maya Bay has become the main tourist attraction of Phi Phi since The Beach was filmed here in 1999. It was always very popular before the film but now people around the world who haven’t even heard of Phi Phi have certainly heard of Maya Bay.

The best time to visit Maya Bay is between November and April during the high season when seas are calm and access to the bay is easy. Rough seas from May to October may hinder access but rarely deny entry.

The bad news: as it is so beautiful and so well know, many boats are required to ferry all the visitors in and out. On any given day at any time there will be 30 + speedboats and longtail boats on the beach, with large ferry boats carrying hundreds of snorkelers and sightseers moored in deeper water. Beautiful it is, secluded it isn’t – thousands of people visit each day.