Mathew Ngau Jau of Lan E Tuyang is a craftsman, a stone sculptor and a musician. I met him at the media and artists canteen and we shared lunch and a nice chat. He had just returned from a concert in Milano (yes!) where he said “it was so cold, it was a taxi-airport-hotel-concert-hotel-taxi-airport trip, not much else”. I commented that the Italian wine must have been a good warmer, to which he laughed loud. 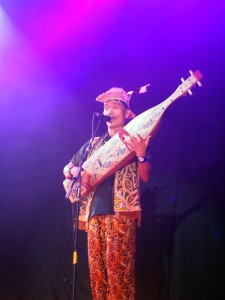 His trio Lan E Tuyang is a traditional Kenyah (the ethnic group Orang Ulu) band performing exotic native Kenyah tunes, comprising two Sapes, a percussionist and a warrior dancer. Mathew plays the Sape, a quite popular string musical instrument amongst traditional indigenous people in Borneo, a three-stringed boat-shaped lute with colourful and ethnic patterns. The Sape produces haunting and mesmerizing sound and is in danger of being forgotten due to lack of interest among the younger generations. No wonder Mathew has been used as the icon of Rainforest World Music Festival.

Recently PETRONAS, as part of their continuous commitment to the preservation of Malaysia’s traditional arts and culture, has contributed to this preservation by donating RM 50,000 (12,500 US$) to Lan E Tuyang to assist in their continuous efforts to preserve, nurture and promote the Sape music through various educational and promotional efforts.

The music of the Kenyahs, hailing from the interiors of Borneo in the area along the Baram river, is very much part of the community and its everyday life. Mathew has been playing the Sape of Sarawak since he was little, and not only is he an accomplished musician on the instrument, but he also makes the sapes, paints, dances, and is an expert on the blowpipe. Lan E Tuyang is a proponent of the Sape music; they have performed in Germany, France, Australia and the US. They also teach Sape music to the younger generations in Kuching and elsewhere, promoting Malaysian traditional performing arts.

Mathew kindly invited me to a future stay at his Lan E Tuyang Homestay, which provides a unique opportunity for all tourists and local alike to experience the way of life of the local people of Sarawak along with their indigenous and traditional cultures. Lan E Tuyang Homestay provides all visitors an opportunity to experience a place in truly authentic, comfortable and homely settings. 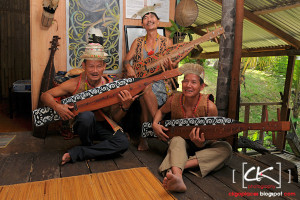