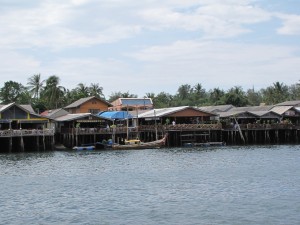 The Island of Koh Lanta is home to the ancient people called Sea Gypsies – or Chao Ley in Thai. A few hundred Thai-mai, as they are officially called, have their homes and their heritage here. These people are the oldest inhabitants of Lanta, a unique feature of Koh Lanta parentage. Nomadic seafarers of Indo-Malay origins, they arrived on the island more than 500 years ago with their unique language, matriarchal social system and animist beliefs. Today they are struggling to preserve their traditional culture in the face of growing tourism and the influence of western culture.

No written or other testimonies exist to verify the real origin of the Sea Gypsies as their culture developed without writing tools. Their only historic records are legends and fables about man’s connection with nature. The Sea Gypsies of former centuries were said to be feared as pirates. One theory holds that they are descendants of the Malaysian colonies that evaded the Muslim invasion of Burma. Some Chao Ley in the extreme south of Thailand are from a tribe called Urak Lawoi, who according to local legends are relatives of Morgan, another group of Sea Gypsies on Surin Island in Phang Nga. Both groups migrated along the coast of Saiburi, now Malaysia ‘s Kedah state, around Gunung Jerai Mountain. They later separated and established separate settlements on various islands in the Andaman Sea.

Today the Sea Gypsies are a mixed people with their own unique language and brand of animism. Their belief in supernatural and traditional spiritual worship is still influential in the Lanta community. Dead bodies are deposed of on cemetery islands where the spirits of the dead live on. Two of the most important animistic rites still celebrated are the worshipping of spirits by raising two high poles as a door or threshold, and the twice a year launching of the wooden spirit-ships during the Loy-Rua festival.

The Sea Gypsies are traditionally nomads who roam the sea. However, their colony of Koh Lanta is an exception from the usual nomadic life-style. They have established themselves in Baan Sang Ka U, a village on the southeast coast of the island. Many of them have been granted land, surnames, and citizenship in Thailand. These unique people blend into the local population but they retain their own language, culture and close ties with the sea. They hold a subsistence-based fishing livelihood, like they have done for ages.