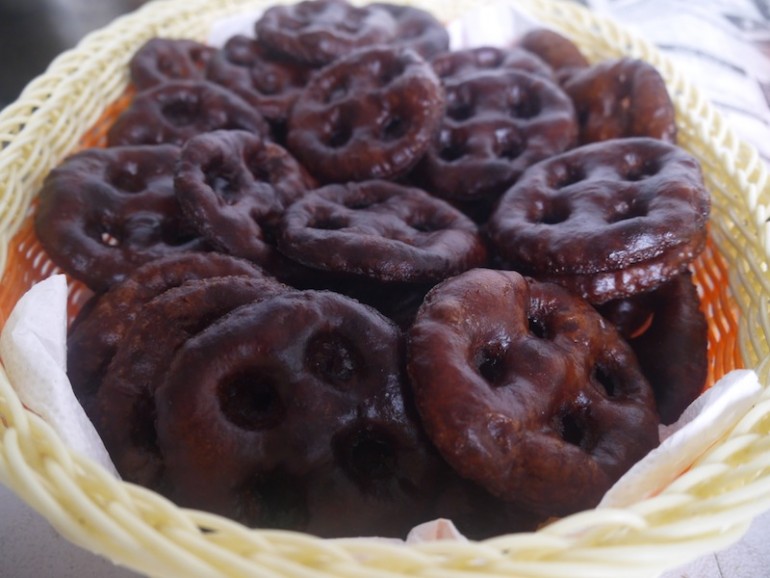 According to a tribal Bidayuh belief Kuih Dam traditional cookies (or Deram in the local language) were prepared in ancient Sarawak to be served for ancestral spirits of those who had passed away. During those times, the Bidayuh people were mainly animists, believing in subtle beings. Today, in line with the passing of time, with the several technological advances as well as with the fact that most Bidayuh people have been converted to Christianity, the tradition has changed. Kuih Dam cookies are now served outdoors right before Gawai Dayak Celebration, which falls yearly right after the harvesting season, between the months of May and June, as well as as an afternoon tea-time snack. 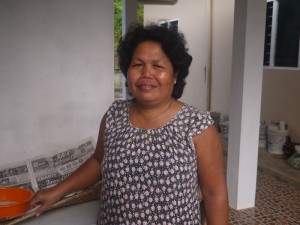 So let me share a little more about this savoury delicacy that can only be found in Sarawak, Malaysian Borneo, the land of beauty and wonders. It was during last year while serving in my reporter’s position that I managed to track and interview a cookies maker known as Miah Aheng. Miah is nearly 60 years old, and she has been making Kuih Dam since she was young.

Miah stated that for her, Kuih Dam cookies is synonym with the Bidayuh people as they are made of rice flour, Bidayuh’s staples food. In the old days there were no cakes, biscuits and cookies around, so Bidayuh’s ancestors used rice – the most ready ingredient they had from the paddies, and whatever other available ingredients they could find in nature to make the cookies.

“In the past, people’s lives were hard, there was poverty and there was no such a thing as a store in most villages. My ancestors kept trying to make cookies with what they had, until one day they mastered the practice” – said Miah Aheng. 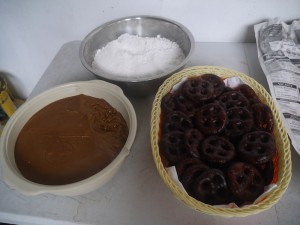 Some of the ingredients

Apart from a good skills, making Kuih Dam cookies is not an easy process, which requires a keen interest, determination, patience and lots of practice. Miah still remembers her first attempts: “Oh my god! At first it did not work. After two or three attempts I was so fed, and the cookies could not cook let alone be eaten, that I got angry and threw all the flour on the floor. Once I had made 3 kg of dough that did not want to cook at all, and each time I put the cookies in the hot frying pan, they crushed in the oil. I tried again and again, same result. It took me several attempts and years to master the practice, only reaching perfection last year”! 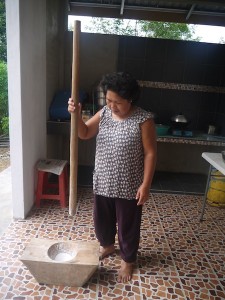 Miah during the preparation process

When I asked Miah what drives her to making cookies, she told me she did it for the love of her beloved father, who really enjoyed eating the cookies. “Ever since my mother had passed away, father kept on mentioning about these cookies. Yet, nobody in my family knew how to make them”. So it was thanks to the love for her father that she learned how to make Kuih Dam. Miah has come up with a special recipe for the cookies, and she now wishes to cook them not only for her family, but also to sell them for those keen on trying.

I believe not many young Bidayuh people know about these traditional cookies. Miah’s efforts in making Kuih Dam should be followed by the young generation in order to keep the tradition away from extinction. 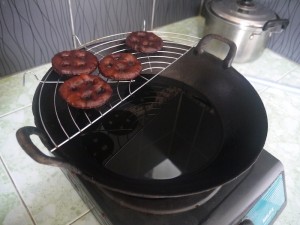 Kuih Dam after fried in the pan

For those interested in making Kuih Dam, this is the way:

First of all, soak the rice in water for at least 8 hours. Then drain it and pound the rice in a wooden pestle and mortar – locally called as Aruh in Bidayuh language – until it is very fine.

The rice should then be sifted together with the flour. Add in palm sugar or gula apong in the bowl and blend all together. Let the dough to rest in the bowl for a few minutes. Once ready, take a bit of it and make a circle; then knead it, making three holes in the uncooked cookies. Get your pan to a sizzling hot temperature and fry the cookies until your Kuih Dam are ready. Remember your hands should be oily while mixing the ingredients, so that the dough does not come out sticky. Happy cooking!

Cato is a young woman from Sarawak, Malaysian Borneo. Cato gained a Bachelor Degree with honours in Social Science majoring in Communication Studies at the University Malaysia Sarawak - UNIMAS. After a long spell as a full-time reporter writing for TV and Radio news in Borneo and beyond, she is currently a Special Officer in the public relations field. She is also a regular and passionate contributor at Asian Itinerary. Cato is a dynamic woman with several interests and hobbies like travelling, listening to music, playing guitar, reading, kayaking and surfing the Internet. She is a young promise in the travel-writing world, and one of the main exponents of Asian Itinerary.