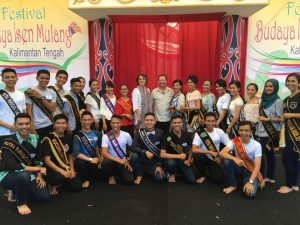 Central Kalimantan is the third largest province in Indonesia; located in the island of Borneo, it is divided into 13 districts and one single town: its capital Palangkaraya. Each Dayak district has its own language, and there are more than 15 Dayak languages, with the majority of Central Kalimantan speaking Dayak Ngaju. Isen Mulang Festival is a very special event celebrated for the past eight years, which seems to get bigger every year. It comprises a series of competitions held yearly in the month of May in Palangkaraya, exposing the Dayak culture of Central Kalimantan.

Isen Mulang (Isen = Abstinence, Mulang = Surrender) means ‘never give up and strive to achieve’. Isen Mulang Festival fosters the spirit of Dayak citizens: to unite, build together, tolerate and to keep the human dignity high.

During the competitions, there are races and dancing contests both inland and on the coast, and dances, songs, beauty, sports and traditional games. Thousands of Dayak males and females from the forests and inland villages, young and old, representing their districts and hometowns, participate in a National Carnival traditional parade held mainly in the center of this small town.

Isen Mulang Festival also holds an exhibition that promotes regional produce and handicraft made with regional resources: a wide range of local food and snacks (including a grand food baking competition) as well as clothes and wicker items. Also presented are the traditional Manyipet, a local blowpipe, and the Gasing, a spinning top, as well as a fascinating but serious game of ‘fireball football’ (Sepak Sawut), which sees teams compete on a small sized football field with coconuts that are literally doused in petrol and set alight!

There are competitions to catch fish by the bare hand, traditional canoe races (Besei Kambe), Prince and Princess of Tourism competition, wood chopping, blow dart shooting, traditional Karungut singing and very loud contest of building ornamental Dragon Boats, where much care and effort is put into decorating the boats in intricate Dayak motifs, which are then paraded up and down the river.

Each area of expertise has a winner, with participants collecting points that will count towards winning the title of overall champion. Local people dance, socialise and pose for cameras.

Needless to say, all Dayak citizens are always very enthusiastic to participate in this festival, which also attracts many other Indonesian cultures – Java, Sumatra, Sulawesi, Papua, the Maluku Islands, Bali and Nusa Tenggara are all represented through the streets of Palangkaraya – and lots of foreigners who attend this important cultural event. Beautiful Dayak women sing and dance, young warriors dressed in feathers, their bodies adorned with tattoos, chant ancient songs and swing their machetes in the air. It is one of the few opportunities in Kalimantan to watch a gathering of so many Dayak tribes together in one place. 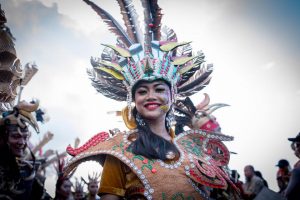 Be part of moments of this event, which occurs on May the 18th each year. This is a great opportunity to talk to the very friendly people of Palangkaraya, who are very excited to meet foreigners. Watch the parade and join in the festivities in a spirit of dance, fun, joy and cultural expression, with the large stage filling with giant feathers, bear claws, pointed hornbill beaks, bells and chains.

More info and bookings with Central Borneo Guide on http://centralborneoguide.com/package/isen-mulang-festival-cultural-show-extravaganza/