They take place all over Thailand but are particularly popular in the south of the country, from Koh Samui to Phuket, from Krabi to Yala, Narathiwat and Pattani: Hua Nok, the colourful and traditional bird singing competitions, are a fascinating part of Thai culture. Thousand of spectators are drawn to the biggest contests, with hundred of competitors hailing from Thailand, Malaysia and Singapore.

Breeding birds for bird singing competitions is a mainly a popular past time of muslim fishermen. Nok Krong Hua Juk songbirds, most commonly the smart Red-Whiskered Bulbul, are usually find in nature, where several species reside. Locals who dedicate to this hobby usually have sharp senses and can unveil birds’ nests with baby birds or even bright green eggs both on the ground and on tree branches.

The number of birds a local household owns is usually synonymous of wealth of a family, since a Juk bird can cost 3,000 to 100,000 baht (100 to 3000 USD), with some families owning more than one special bird. These beautiful birds have a peculiarity: only the males have a distinctive voice, and gender is not discovered until the birds grow. When adults, females are generally released because of little use to the villagers; however, used to the comfort of daily food and too frightened to change to a new environment and unable to find food, they eventually return to the safety of their cages.

A bird awaits the start of the competition

This hobby involves entire households: men train the birds by making them listen to a tape that plays the voice of a bird that has won many contests, so they can learn to imitate it; the best performing birds will be taken to competitions and are fed by the kids with worms that can cost up to 3 baht each. Women are known to be proud of their husband’s birds good voice and motivate the men’s continuous strive to get their birds sing better and better.

The birds are kept in ornate bamboo and wooden cages draped with elaborate and colourful cloths; they serve as a decoration for many local shops and houses. Birds’ owners regularly spray them with water to refresh them and take them in their cages for ‘entertainment rides’ at the back of pick-up trucks. 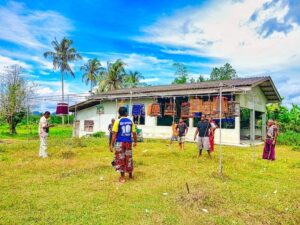 A few locals exited before the contest in Koh Klang, Krabi – Photo By Guglielmo Zanchi

The contest ground is fit with either a metal grid about three meters high that looks like an extensive clothes-drying racks, or 5 meters high poles where the ornate cages containing the birds are hoisted onto hooks. Nestled in their cages, the birds sat perched on poles awaiting their singing turn.

The timekeeper stands on a platform with his equipment: a whistle, a microphone, a large clear glass jar filled with water, and an ornamental tin bowl with a hole in the bottom of it. When he lets the tin bowl go, the bowl gradually fills with water and sinks. Just when it touches the bottom of the jar, the whistle goes off and the judges listen to two birds apiece, indicating the number of times each bird sings by holding out fingers, with each session lasting approximately 20 to 25 seconds. There are generally four rounds, during which each bird must sing at least three times in order to advance to the next round. To be noted that Bulbul birds sing in short bursts. Winning is determined by how many times the bird will sing in a given period. 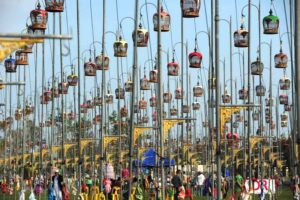 More than 1,600 birds from Thailand, Malaysia and Singapore took part in the annual contest

There is then a lot of yelling and whistling by the owners, aimed at encouraging their birds to sing. When the second whistle goes, the judges mark cards hanging from the cages with the number of times the bird has sung in the round – expert birds may trill as many as eight times in a round! But not all contests are only about the number of times each bird sings; in some less commonly-held competitions, the judges award points to the birds’ songs based on pitch, quality and clarity of the voice, melody, volume, and even on the way birds hop around in their cages while singing. As the competition proceeds, the numbers are whittled down as birds fail to keep up with the pace, until finally a winner is declared. Judging is of course highly subjective, and some heated disputes can arise between judges and bird owners. 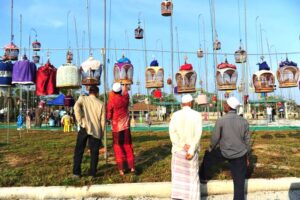 For an outsider, watching a songbird contest can be rather confusing, as they are quite chaotic: there is a lot of shouting, dozens of people whistle and wave their hands, and you wonder how the judges can hear anything in that mess, but they are well-trained and they do actually hear the birds! Bird singing competitions are mainly a past-time of muslim communities. Big competitions like the one in Narathiwat province featured in the article’s photos can attract hundreds of entrants, with competitors pitching their singing birds against each other for money prizes that can reach up to one million Thai Baht (30.000 USD)!

While there are several fixed weekly and annual contests held in big arenas, small bird singing competitions are usually held on Sundays at main contest grounds in practically every small village of Southern Thai provinces, and smaller competitions can pop up anywhere really. Smaller, uneventful contests can involve doves rather than Bulbuls, but these are rare. 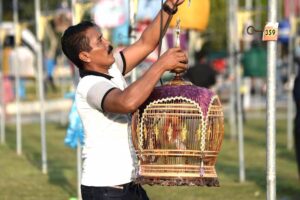 A bird owner from Malaysia hangs his feathered competitor

Going to a bird singing contest is a colourful and unique experience, and visitors and passers-by are welcome to experience the competition, with bird owners always welcoming and happy to explain what’s going on (if any of them can speak English, that is). And if you wish to get involved… cages and birds of different quality and price can be purchased at shops in major towns in Phuket and Koh Samui.

So next time you are in Thailand and you find yourself driving around on a weekend on your moped, just keep your eyes open: you may be lucky and see a group of people surrounding ornate bird cages getting a competition underway. Stop, and watch an array of low fowl compete for the crown. Believe me: it’s fun!