The quartet that has performed tonight under the portico of the ex Cultural Center in Piazza Zanti, Cavriago (Reggio Emilia), does not need an introduction. Gaia Cuatro are a fusion between two world so far yet so musically near. A risky musical meeting/clash between Argentina and Japan on the frontier of a Jazz light, fresh and captivating, as well as rhythmic and melodic. A fertile bond between tango and Jazz.

These four musicians take the art of improvisation to a whole new and unpredictable level. When two of the best musicians and great symbols of the Japanese Jazz scene – violinist Aska Kaneko and percussionist Tomohiro Yahiro – and two of the best representatives of the Argentinian colony here in Europe – bass player Carlos ‘El Tero’ Buschini and pianist Gerardo Di Giusto, merge, the subtlety of Japanese traditions merges with the creativity and the character of Argentinian music, providing the raw materials for this exceptional quartet. 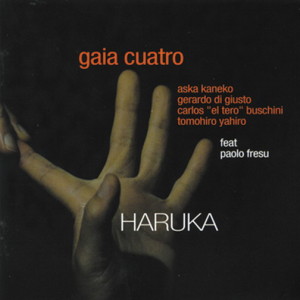 The concert in Cavriago has been original and captivating, with plenty of original tunes that with their surprising elegance made us feel close to them. Gaia Cuatro’s tunes, with their interwoven instrumental conversations, have a charged natural feeling, and while they are being played, you have the sensation that a new style of music is being shaped.

Once again, Jazz proves to be the ideal instrument for people at time so different between them, who wish to exchange musical idea in a free and creative language.

Japanese Aska Kaneko is a violinist, a composer and a singer. Aska has often alternated his career as music director with projects like Aska String Project, shaped towards a musical experiment between her country and Europe. A breathtaking violinist, a true star in her native Japan, Aska is able to take us to a new world made of her mind-blowing virtuosity and of a voice that makes you shiver. 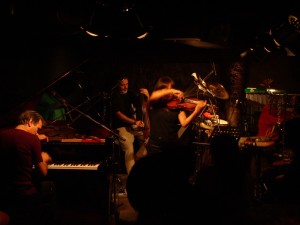 Japanese percussionist Tomohiro Yahiro, always in perfect harmony with Aska Kaneko, has cooperated with the most important jazz musicians of Japan, and belongs to two amongst the best known groups in his native country.

Pianist and composer Gerardo Di Giusto was born in Cordoba (Argentina) but has been living in Paris for several years, where he met with the other members of Gaia Cuatro. Gerardo Di Giusto has founded, together with Carlos Buschini, Javier Girotto and Minino Garay the group Cordoba Reunion. His task is to create sophisticated and colorful compositions that respond in perfect rhythmic harmony to the rest of the quartet.